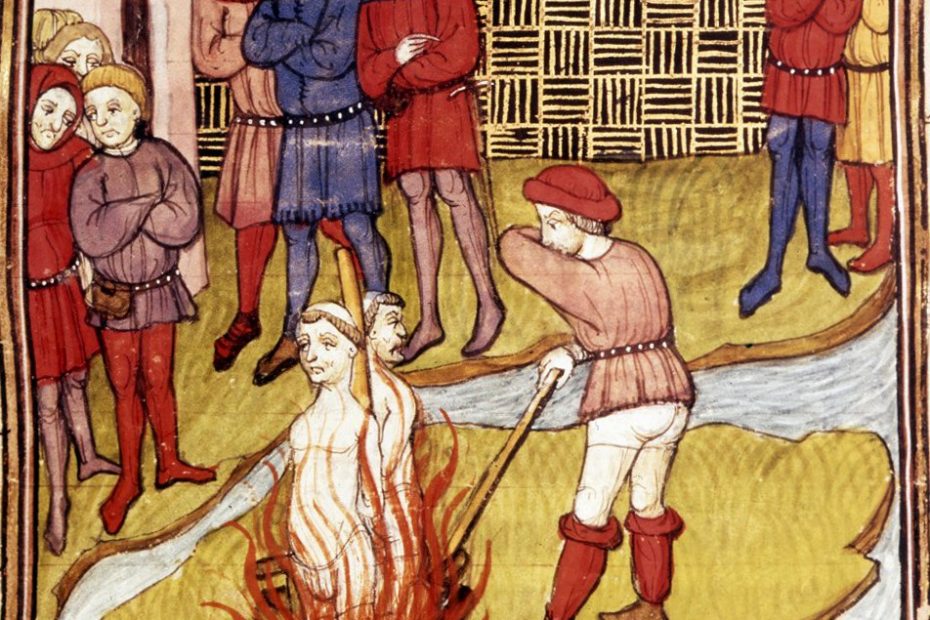 47. The collapse of tradition in Western Europe

The collapse of tradition in Western Europe

Dante predicted that two popes, who that time were still alive, were destined to hell. They were Boniface VIII and Clement V. The former was the most fanatical supporter of the temporal supremacy of the Church over the Emperor, the kings and princes of western Christianity; the grey eminence behind the papacy of his predecessor, Celestine V. Boniface played an important role in inducing that mild and shy pope to abdicate. In this way, with a rigged conclave, he took over the power from Celestine, who had returned to hermit life. However, dubious of Celestine’s sincere renunciation and fearful of a possible reaction from his supporters, he threw him in imprison where he eventually died. Meanwhile, the Empire was going through a period of crisis because the candidate Emperor, Adolf of Nassau, King of Germany, had been deposed by the same princes who had him elected, thus triggering a tragic civil war. Therefore, Boniface VIII was well aware that the Empire did not pose any threat to his politics. Instead, he feared the growing power of the King Philip IV of France. For this reason, he approached the King of England, who was then also Duke of Aquitaine, and thus more than a simple nuisance to France. Despite this alliance and the violence with which he exercised power over the State of the Church, the pope had no choice but to come to terms with Philip IV. He agreed to crown the king’s cousin, Charles of Anjou, as king of Naples and to sanctify his grandfather, Louis IX. Therefore, he unscrupulously used excommunication, inquisition and canonization as political instruments. However, his claims of temporal power were frustrated precisely by those national sovereigns that the papacy, for two and a half centuries, had instigated to become autonomous from the Empire. Death caught him at a time when all the major powers, the senate and the people of Rome were openly averse to him.

The second pope placed in hell by Dante, Clement V, was the protagonist, together with the King of France, of the infamous persecution against the Knights Templar. After the fall the city of Acre (1291), the last three hundred monks-knights stationed in the East withdrew from the Holy Land to Cyprus under the guidance of Grand Master Jean de Montfort. On that island, these survivors dedicated themselves to ascetic life. Once dissipated their warrior zeal, the Knights Templar had turned to contemplative life. Even the knights who had remained in Europe to administer fiefdoms, commanderies and castles, gradually lost the ancient ascetic-military inclination and retired to religious life. This drift contributed to the weakening of the Order’s function, that of presiding over and coordinating the initiatory organizations of the West. While living their daily lives in frugality, the Templars had accumulated an immense fortune from donations and offerings from the princes and lords of the time. Their function of controlling the coinage of the Christian States also made them powerful; and thus numerous rulers increasingly turned to them for loans and financial support. King Philip IV of France, known as ‘the Fair’, got heavily into debt with the Order in order to strengthen the royal power.

Aware of not being able to repay the loans and fuelled by the greed for the immense wealth of the Order of the Temple, he decided to take possession of it. On October 13th, 1307, he had all the Templars of the Kingdom of France arrested in a single night. They were incriminated with unfounded charges of heresy, idolatry and sodomy. Clement V, the French pope elected in 1305 thanks to the pressure exercised by Philip the Fair, although aware of the one-sidedness of this farce trial, suspended the Order and disposed that all its patrimony were to be donated to the rival Hospitaller Order. Unsurprisingly, in France it was the King who took over everything, including what had been assigned to the Hospitaller Knights. The trial against the Templars lasted until 1314. By means of the most ruthless tortures, false confessions were extorted from about sixty knights, often retracting at the end of torture. The tragedy ended with the condemnation of the Grand Master Jacques de Molay, who was burned at the stake. Molay is said to have serenely faced the torture and predicted the imminent death of those responsible for that horror. In fact, within a year both the pope and Philip IV died. The fleeing knights took refuge in England, Scotland, in the kingdoms of the Iberian peninsula and in the principalities of Germany and Italy, where they were welcomed into local chivalric orders and craft guilds (sskrt. śreṇi).

In the other States of Europe, the dissolution of the Order of the Temple was carried out according to papal dictates; without, however, the same iron fist that marked the arrests and trials ordered in the kingdom of France. Yet, the Templars’ main centre had always been in France, therefore the anti-traditional action of Philip the Fair had successfully beheaded the entire magisterial hierarchy. The general situation of the initiatic organizations connected or subordinated to the Temple was of maximum alarm and widespread confusion. It is no coincidence that Dante himself happened to be present in Paris during the Templar trial; the secret head of the Christian initiatic ways and member to the Third Order of the Temple could not help rushing to pick up some legacy. This is, indeed, the most mysterious episode of his life; so much so that many academics are inclined towards the unlikeliness of his stay in Paris.

In the meantime, other events had occurred. In 1308, after the death of Albert of Habsburg, the Templar Henry VII of Luxembourg became king of Germany and of Arles. After re-establishing order in Germany, he descended in Italy to be crowned Emperor. The military expedition of the monarch, although opposed by Philip the Fair, by Robert of Anjou, King of Naples, and by the many Communes that, at the papal instigation, had rebelled against the Imperial authority, was largely a success. Henry was crowned King of Italy, King of the Romans and, in 1312, Emperor. While the dreadful events of Paris described above were unfolding, the Faithfuls of Love and the Italian Templars saw in Henry’s crowning the possibility of a restoration of the traditional order. Dante himself appeared almost as the sapiential inspirer of that thrilling adventure. However, the dream came to an abrupt end. In 1313 the Emperor suddenly died, poisoned with arsenic, probably at the hands of his Franciscan confessor. It was the collapse of all hope. Templars and Troubadours dispersed. Many of them fell into the hands of the Inquisition. Dante himself, although under the protection of knights of the highest rank who hosted him as a guest, became aware of the unfavourable signs of the times and transformed his work, the Divine Comedy, into the Testament to all Western initiatic wisdom for future times. Tradition wants that he predicted that the meaning of his message would only be understood six hundred years after his death. And so it happened.

After Dante’s passing, no one evidently succeeded him in the role of guru, although there was a new generation of Faithful of Love of great importance that include Petrarch and Boccaccio. The latter made a special effort to confuse the ideas of the uninitiated with regard to the Holy Faith. While the Black Death, the plague of 1348, was ravaging the population of all Europe, one last attempt to restore the tradition was made. Cola di Rienzo, who is said to have been the natural son of Henry VII, took over the city of Rome, which was in a state of absolute decline after being abandoned by the popes and prey to the depredations of powerful rival families. His attempt was to re-establish the res publica of ancient Rome, while maintaining Rome as the capital of both the Empire and papacy. But times had changed. After the first successes, despite both Imperial and papal support, he was killed by the wrath of the Roman populace.

The tradition in the West had now interrupted. From that moment on, a mercantile civilization prevailed, dedicated to the worst follies of individualism, magic and naturalism. The modern world was born.